The Weather Network is broadcasting their 2017 summer forecast for the United States. Yep, the whole country for the next 3 months…because local forecasts a week in advance are so great, this must be really good stuff! Sarcasm aside… at least they are not being too precise, but rather giving generalized information relative to “normal”.

Here is the projected precipitation for the summer. 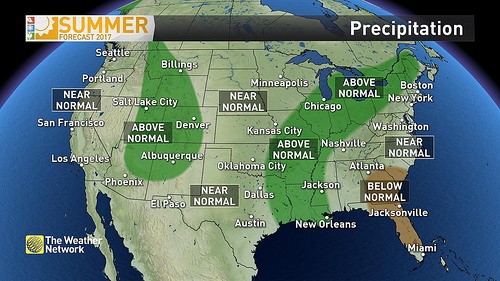 And the projected temperatures. 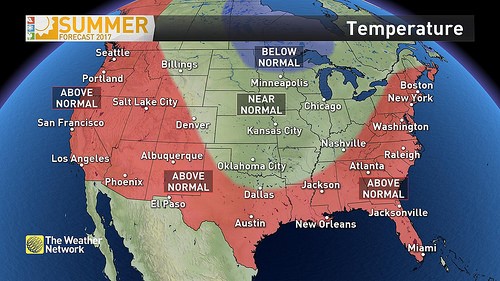 What to make of this? A few things stand out.

Florida is the big deal here: hotter and dryer than normal. The Sunshine State has had bad wildfires through the winter and spring, and hotter + dryer summer months can only make a bad situation worse. This also jives with the Colorado State Atlantic hurricane forecast of slightly-below-average activity in 2017. Florida could have a really bad wildfire year.

Sticking with wildfire, anytime you see above average temperatures in the western states, especially California, the expectation is for potentially bad fires. Hopefully there’s enough moisture to keep the hills there not on fire.

Meanwhile, the mountain states are looking at above normal rainfall. While catastrophic flooding is unlikely because of “above normal” rain, it doesn’t take much heavy rain in those states to cause some flash flooding. Watch out Boulder.

These forecasts, of course, are based on models…and they are not going to be right. It’s impossible to know what’s going to happen with the weather over the course of a season, or a year. And that is the crux of a cat underwriter’s dilemma: they need to know the chance of something happening in the next year.

One way around the dilemma is to assume something (a flood, a wildfire) is going to happen around the property, and then determine the chance of the specific property being damaged (i.e. where, not when). Because while it’s impossible to predict where floods or fires are going to happen, it’s entirely predictable that they will happen somewhere in the country in the coming months.