In the preceding three years, I have had the great pleasure of attending some of the foremost conferences on wildland fire hosted by organizations like the National Fire Protection Association (NFPA) and the International Association of Wildland Fire (IAWF). I have also been fortunate to have the opportunity to visit the world-class Missoula Fire Sciences Laboratory at the Rocky Mountain Research Station to speak with some of the leading researchers in this complex field of science, economics, and politics.

Through these experiences and conversations, I have learned that there is a growing sense of uneasiness as we are faced with wildfire behavior that represents a significant and rapid departure from what has been observed historically. This is causing people to think more critically about wildfire management policies and the effect of wildland fire fighting.

Stoking this uneasiness is the perception that efforts have been ongoing for years now with millions of dollars of funding, and yet there is little tangible evidence that what has been done is having a positive impact. In fact, some economists now estimate that our efforts to manage wildland fires are having a doubly negative impact. The argument being made is that excessive wildland fire management does two things:

The first point is obvious; especially the cost of human lives, upon which it is impossible to place a dollar value. To the second point, it has been theorized that human interference with the natural process of wildfire results in an unnatural over-accumulation of fuels that would have otherwise burned had we not stepped in to “help.” The effect is that we are trading a mild or moderate severity wildfire today for a furiously intense wildfire tomorrow. 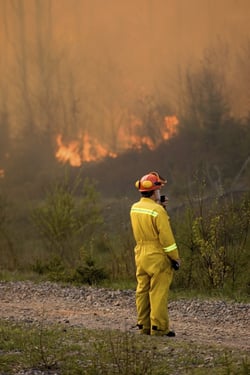 This is pretty radical thinking and creates for some incredibly tense and heated (pardon the pun) sessions at the wildland fire conferences. To help balance the scales a bit, it helps to consider how you would feel if part of that “over-accumulation of fuels” included the house you live in, located at the outskirts of town on the fringe of the wildland. I don’t know about you, but the idea of having wildland fire fighters called off the job when a blaze approached my community is unsettling. I would be very grateful for not only the federal funding, but also their willingness to risk their lives to battle the blaze on my behalf.

Perhaps the solution is somewhere in the middle. It may well be true that we are committing too many resources to managing wildland fire and need to scale it back a bit. On the other hand, perhaps we just need to shift those resources away from extinguishing fires and toward practices such as controlled burning and forest silviculture to reduce fuel buildup and decrease the likelihood of intense wildfire.

I have no doubt that the subject will continue to be discussed and debated at future wildland fire conferences. I, for one, will watch eagerly as the greatest minds put this issue to the test.