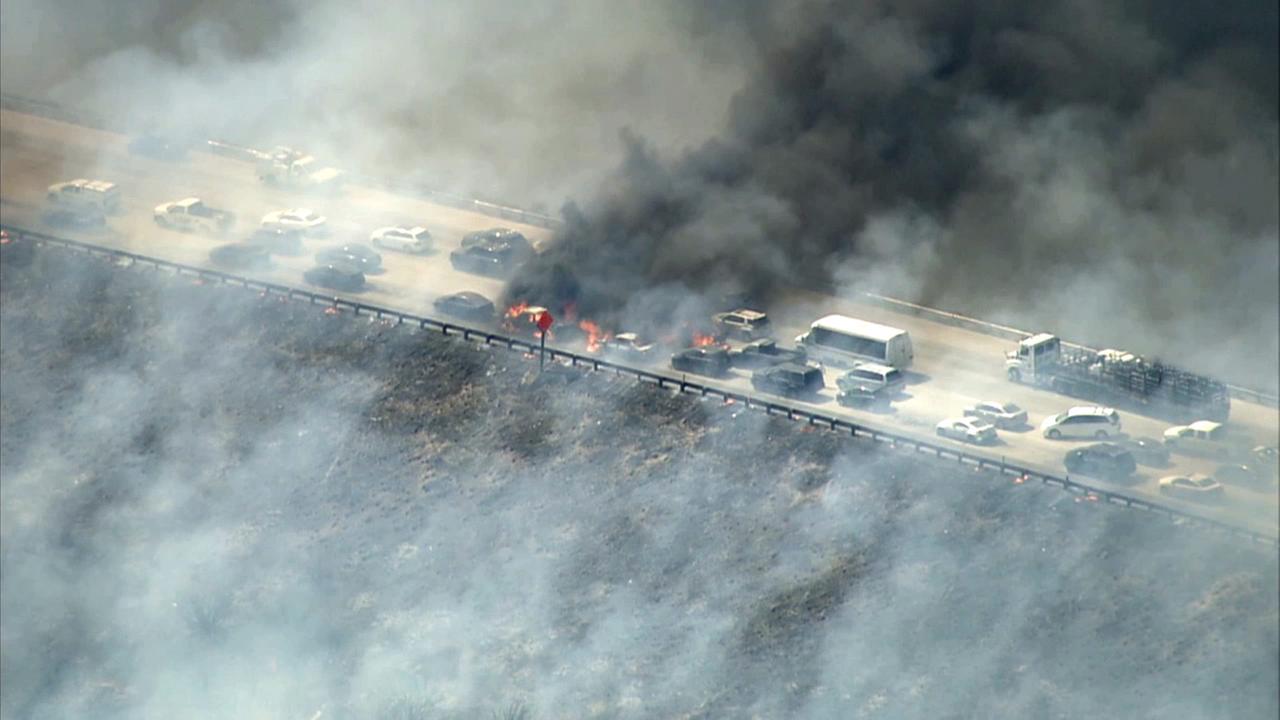 Have you heard it’s raining in California? Los Angeles has broken precipitation records for July, and there have been flash floods throughout southern California and Arizona. The Angels even had a ball game rained out for the first time in over 20 years. The moisture has helped with the drought and a bad wildfire season, but it has added to the headaches of property insurers writing in California. Weather from the west coast is regularly newsworthy, but this past week has been extraordinary. How weird has it been? It even snowed in the Sierra Nevada this week.

First in the news was the North Fire in the Cajon Pass on I-15, between L.A. and Las Vegas (pictured above). The fire swept down a hillside and ignited about 20 cars, including a tractor trailer, as it jumped the freeway. Spectacular live scenes were on the news, and the Internet is still full of amazing scenes from the fire. Wildfire has been bad out west, as discussed here on the blog and in articles like this. What everyone was hoping for was some rain.

And it came. The southern half of California (and Arizona) has received all the rain it has been hoping for over the past few years — all at once it would seem.

Los Angeles and San Diego both set single-day rain records over the weekend, and records for July totals are going to be broken. The immediate result was widespread flash flooding, including the destruction of a bridge on the other main Interstate heading east from L.A. This bridge collapse on I-10 adds an extra 100 miles on the drive to Phoenix for the next couple months. More rain is distinctly possible this summer, as the atmosphere is setting up a route for tropical (i.e., moist) air to keep coming into the state. There are even hurricanes to consider, with no-longer-Hurricane Dolores still sending moisture into the state, and a high probability of more east-Pacific hurricanes this season. (Pacific hurricanes are setting records this year, too). And all this rain is nurturing future wildfire fuel — it just needs to dry out.

The wildfire and flooding have both caused significant property damage and disruption to people’s lives, but the worst might be yet to come.

Climate models and observations are aligning to predict a significant El Niño this coming autumn/winter. Daniel Swain on The California Weather Blog just published a post describing all the data behind the prediction. Here is the gist of it (including his caveat for models, with which this blog definitely concurs):

"Generally speaking, healthy skepticism is warranted when complex dynamical models make predictions that involve totally unprecedented extreme events. But 2015 has already been a year of record-breaking meteorological extremes across vast swaths of the Northern Hemisphere, and considerable evidence suggests that there will be more to come. At this point, it seems quite likely that very strong El Niño conditions will be in place by late autumn 2015, and there is some risk that the present event could eclipse even the extreme events of 1982-1983 and 1997-1998."

Could we be about to experience the strongest El Niño on record? There is reason to believe it’s possible, and property insurers are taking note — including the National Flood Insurance Program (NFIP). They are updating Flood Insurance Rate Maps (FIRMs) in California this year, increasing the size of A-zones in places like San Mateo. According to this article, the new A-Zones in San Mateo are linked to the El Niño forecast; in the words of San Mateo Public Works Director Brad Underwood: “While there is a severe drought now, an El Nino is expected to deliver heavy rain this winter.”

For property insurers in California, the time is now to take a close look at their portfolios in relation to both wildfire and flood risk. Location-based risk for all properties (already written, or yet to be written), with diverse risk models and other useful information, is always a good idea…but when natural catastrophes of historic proportions are being forecast like this, they become critical. One-in-a-hundred year floods aren’t just a red zone on a map — they are bound to come to pass sometime, and that time might be soon in California.