Flood Models are Biased, Because They are Models. But that's OK!

With the release of FloodScope™, our risk assessment software, InsitePro™, now comes with two flood models that users can use for evaluating USA flood. Having multiple flood models is useful for creating flood risk scoring analytics because it allows the scoring to consider more than one view of the risk, and to leverage a correlation analysis to account for the uncertainty aspect of a location’s risk; e.g., if two models agree, uncertainty goes down. Working with these two flood models also presents an opportunity to explore an aspect of flood models not frequently discussed in flood modeling literature: the bias. The two flood models that are available for all InsitePro users in the USA are FloodScope and WorldFlood™, and they have demonstrably different biases.

What? Flood models are biased?

Yes – all models have a bias. Even models that purport to be “neutral” have a bias, because “neutral” is always ambiguous in something that needs to be modeled. Hopefully, this is not news to those who use flood models.

WorldFlood is a global flood model that was originally built to help a broker accumulate global exposure to river flood. Thus, the model is conservative – it tends to have a pessimistic view of the risk, with broad flood zones intended to minimize the misses; i.e., locations outside a flood zone that actually do flood. When accumulating a portfolio across the world, you want to be sure you’ve captured all the risk, and using a bigger net to do that is useful.

Meanwhile, FloodScope is built for underwriting. The modeling technology is not too dissimilar from WorldFlood, but it is performed on much higher resolution elevation data, and it is calibrated on the FEMA special flood hazard area (SFHA) in a few very select locations. The result is that the flood zones are much smaller than those of WorldFlood – the model is more aggressive. 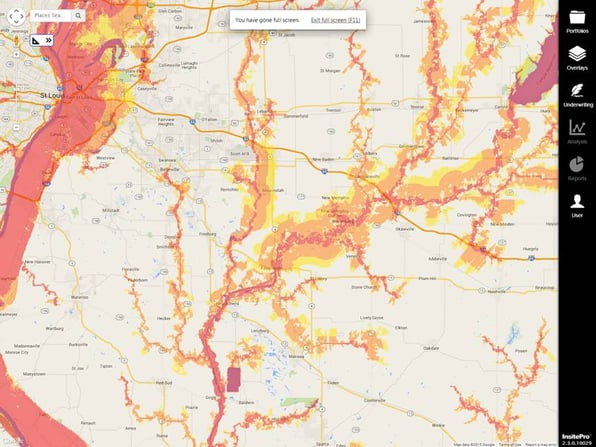 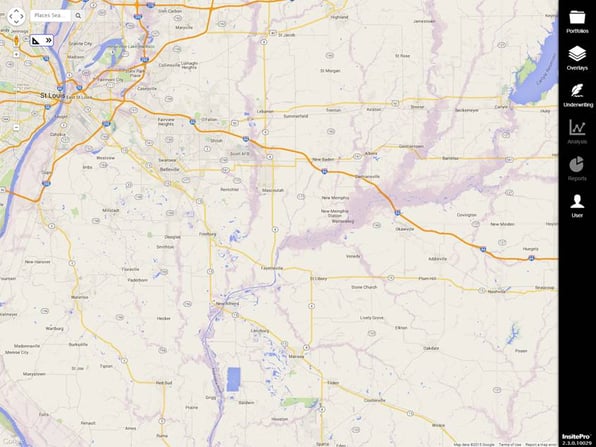 Views of the flood zones east of St. Louis, in WorldFlood (top) and FloodScope (bottom).

Which is right? Neither, of course. All models are wrong, but some are useful. Maximizing the usefulness of the models is what users need to do. Including them both in a flood risk score does that. By using both flood models, here are a few things a flood risk score can do:

Building custom scoring analytics with as much data as possible, including multiple flood models with differing biases, is powerful because it can blend both approaches (conservative and aggressive) so the bias is leveraged best for each location. In the end, flood models are just another type of dataset that can be used for evaluating flood risk. Combining them intelligently allows underwriters to maximize the value they get from the models, and a configurable flood risk score lets them do exactly that.