Last week, Cyrena Arnold, the Director of Product Sciences at Weather Analytics, and I blogged about hail, exploring available analytics with the March storm in the Fort Worth area. The response has been incredible to that blog, so a reprise is in order. Revisiting the topic seven days later might seem like a stretch, but there is plenty to discuss from those seven days.

Texas had a really bad March, with the big carriers posting results impacted by the March storms: Allstate, Travelers, and Progressive led the way. Then, April happened, including the April 12th storm in San Antonio that is shaping up as the costliest in Texas history – expecting over $1.3B in insured losses.

But while Wall Street counts beans with trembling fingers, the insurers are more placid about the storms. AM Best summarized the situation in a briefing, stating, “Claim payments will be limited in part” by industry changes in property, including the adoption of by-peril pricing algorithms and “greater granularity of risk characteristics.” In other words, the carriers leveraging hail analytics have their products tuned to cat losses like this, even when the losses are larger than expected. Travelers CEO, Allan Schnitzer, went as far to say that hail analytics had helped them ensure their pricing was prepared for a spring like this.

Texas isn’t the only state to be battered this spring. On April 26, Kansas and Oklahoma were showered with big hail. How big? Well that’s an interesting question. Reports from parts of Kansas reported “grapefruit-sized” hail, which is a seriously big piece of falling ice. But, as is sometimes the case, those reports might have been exaggerated. The largest denomination of hail used by the US Weather Service is the “softball”, which is pretty close to a grapefruit. The size of hail is dependent upon the winds aloft, as hail is formed by rising and falling through layers of wet and freezing air. As hail grows bigger, stronger winds are needed to keep it suspended in the sky. To grow grapefruits or softballs, the winds need to be around 100 mph, but the storms on the 26th packed winds in the 70 mph range. So, it is unlikely that 4” hail dropped.

Dexter, the hail verification software from Weather Analytics agrees. The biggest hail to be detected was 3”, or baseball-sized hail using the standard units. What was remarkable about the storm, though, were the vast areas hit by hail dropped by a series of enormous storms. So, while the size of hail appears to have been exaggerated to Ruby Red, the storms were still very significant. Here is a look at the hail reports from an area of about 400 square miles, north of Manhattan, KS. 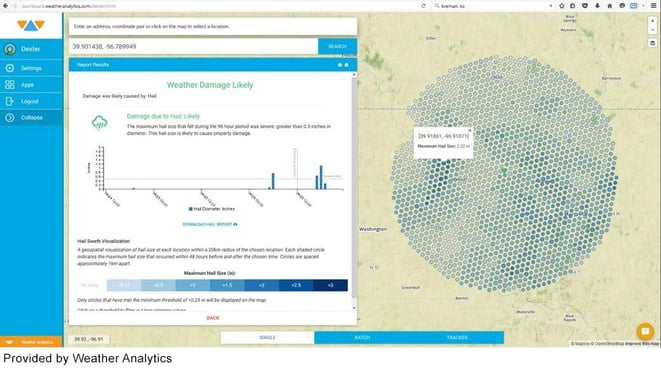 So, hail is definitely the peril of the season for property insurance. It is front page news, and moving the needle on carriers’ bottom lines. However, the carriers with hail analytics are handling it. Property underwriters active in the Midwest and Texas without hail analytics need them now.