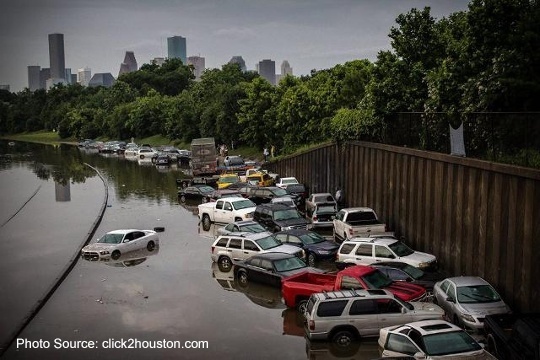 Risks of Hazard took a look at Houston last year after the flooding that ravaged the city in May. We discussed the flooding problem in Houston, and a way to handle it for underwriting flood insurance. Since then, in the past 12 months, Houston has had three (THREE!) headline-making floods.

According to The Weather Network, Houston is America’s Flooding Capital– a designation easily assigned. According to the article, Houston has had 96 days with reported residential flooding (pretty much entirely pluvial) in the past 20 years, averaging a little under five such days each year. It’s a staggering statistic – forget 100 year flood plains, because Houston is in a 2 MONTH flood plain based on the past two decades.

To try and get a better view of the flood risk, here is a very handy flood management tool published by Harris County. It’s a mapping portal that displays the FEMA (NFIP) flood zones, the bayous/waterways designed to whisk flood waters into the Gulf of Mexico, and ponding areas where water is expected to accumulate during storms.

There are two immediate conclusions to draw from these maps:

What can a flood underwriter do about Houston? It’s a great question, and there is a lot of thought being applied to answering it, including here at Intermap. If you have any ideas about how you would like your underwriting analytics to handle Houston flood, feel free to contact me at imaddox@intermap.com. I would relish the opportunity to solve it with insurers.

For now, it might be best to consider these thoughts from Matt Lanza of Space City Weather “Sometimes it really is a matter of luck: Shift a stationary rain band one mile further west and you have a totally different outcome. “ When a city floods, on average, every 2 months, it does seem that luck really does help determine which buildings will flood in a given year. Underwriters need something better than luck, though.