One of the challenges (and joys) of writing The Risks of Hazard is to find an interesting perspective on topics that concern underwriting property insurance. But, sometimes, there is an event that has only one angle: head-on. The “one in a thousand years” rain in South Carolina is a perfect example.

There is no doubt about it – South Carolina has had some seriously bad rain; tons of it, brought by the highly unusual convergence of at least eight key factors. October 4th was the rainiest day on record in Columbia, with almost 7 inches falling on the airport. Charleston set their own single day record on October 3rd with 11.5 inches hitting the city. In addition, it’s already the wettest October on record for most of the state, and we are only a week into it. But, to hear Gov. Nikki Haley state: "We haven't seen this kind of rainfall in the low country in a thousand years," is not just misleading – it is nonsense. Dave Baker at KATC in Louisiana has saved me the trouble of explaining why. 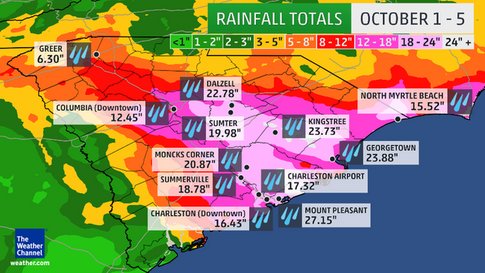 What could possibly be the source of this conclusion? There are no records for the past 1,000 years of precipitation in South Carolina; that would be almost 500 years of records by the time Columbus came across the ocean and suggested his name for the state capital. In fact, the National Weather Service started recording data in Columbia on June 1, 1887. The source is, of course, a model. And it’s a good reminder that all models are wrong, but some (not all) are useful.

The real conclusion to be reached is that the model is broken. It is exactly the same as the recent evaluation of a new Tesla by Consumer Reports:

In rating the Tesla Model S P85D, however, we faced a quandary. The Tesla initially scored 103 in the Consumer Reports' Ratings system, which by definition doesn’t go past 100.

Both this rain storm and the Tesla have characteristics that their respective models did not contemplate. When building a model, there are decisions made about bounding criteria and scales – when the model breaks, by all means repair the model … but don’t quote the results until you do.

So, how are flood underwriters supposed to understand an event that breaks the models? Urban pluvial (rain) flooding is difficult to model or predict, as I discussed in May after the Houston floods, and the cities in South Carolina are probably not big enough to justify an analytic specifically for the city. Most available flood maps, including the FIRMs, vastly underestimate the likely flooding from rain (especially this kind of rain) because they are focused on rising rivers (i.e. fluvial flooding).

The best approach an underwriter can take is to ensure their risk assessment uses as many different types of high-quality, relevant data as possible. Examples include:

Combining all these aspects into a single, location-specific risk assessment can reduce underwriting leakage, which can help keep rates steady after a big event like this.

The rain has stopped, but the flood waters are still high. The clean up and rebuilding will start immediately, and hopefully adjusters can start reaching out to their customers without delay (State Farm is reporting almost 2,000 fire claims in the state so far). FEMA will be providing assistance on top of the inevitable NFIP claims, including grants for temporary housing and home repairs, low-cost loans for uninsured property losses, and other programs to help individuals and business owners recover.

After the recovery and rebuilding are done, it is important for the insurance industry to prevent statistics and broken models from obscuring the nature of the event. After all, rain like this in South Carolina was unprecedented…until about a week ago.