Terrain Data and Pipelines: Thoughts From a Bike

Today we decided to unlock the Intermap blog vault to revisit a a past post written by a former employee, Ryan Hamilton. His thoughts on pipeline safety and the relationship to terrain data were written a little more than a year ago, but are more relevant than ever as we roll out our new product targeted to this very industry — InsitePro for Pipelines™.

"A couple of weeks ago I had a mountain bike race in one of my favorite places in the world: Moab, Utah. The race went okay despite destroying a shock, rear derailleur, and my rear wheel. Even for a hack like me, that is a significant list of parts to go through in just three days of riding. The fact is that southwest Utah is a rugged place and it’s hard on equipment, which is why I was intrigued by a new natural gas pipeline being built along the Interstate 70 corridor. If you were to view this pipeline project in just one spot it might not seem all that impressive; it’s just a 2-foot wide by 8-foot deep trench with a green pipe being laid inside. However, when you observe it for hours on end outside your speeding car window, snaking along for hundreds of miles through the rugged and formidable Moab desert, you get a real appreciation for how monumental a task this project really is. Considering 60 miles of bike riding in Moab all but destroyed my bike, I have to imaging the equipment used in this build project will most likely be scrap metal by the time the pipeline is completed.

Pipelines are critical, not just to the oil and gas industry, but to our country’s general economy. With a transcontinental network of pipeline, price fluctuations in energy cost are kept in check and this is critical for stability in vast numbers of industries and markets. The nation has a huge pipeline network that most of us never notice because, other than during the construction process, the pipeline is underground; out of sight, out of mind. http://en.wikipedia.org/wiki/File:USgas.jpg 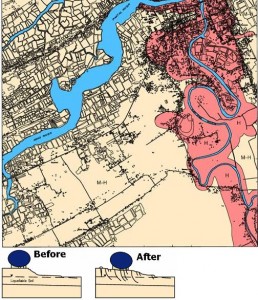 Terrain data can show geologic features such as ancient river beds composed of sediment which, during an earthquake, can liquefy and cause a pipeline to settle and bend beyond its capacity and rupture. Terrain data also provides information on the slope and possible movement of the ground. Pipelines are not stable when they are traversing medium to high-sloped terrain. For instance, if soil movements occur perpendicular to the pipeline, the force will expose the weakness of the pipeline’s joints which can easily buckle under this kind of pressure. Because of this danger, the most efficient way to get over a hill with a pipeline is to go straight up the slope. This allows the soil to move and the pipeline joints to push into one another, and the structure of the pipeline supports itself.  At a certain point, a hill becomes too steep or too high to send a pipeline straight up, so again, terrain is important for planning because the designers need to evaluate if the route must go around, over, or through a mountain. These hill climbs of the pipeline are what really struck me while driving across Utah because they are contradictory to what we see with roads and trails which traverse and switchback over medium- to high-sloped terrain.

Obviously, this is a huge simplification of the requirements of a pipeline route plan, but as a general tie-in back to terrain data’s role, this is a general idea of why terrain is important. Luckily, there are a bunch of smarter and determined individuals out in the desert that ensure the general population can safely perform the simple act of turning up a thermostat or warming a pot of tea without a second thought about how the oil arrived."

To learn more about how location-based data affects the operation of pipelines, including some important industry changes that are happening right now, click below to watch our free video.