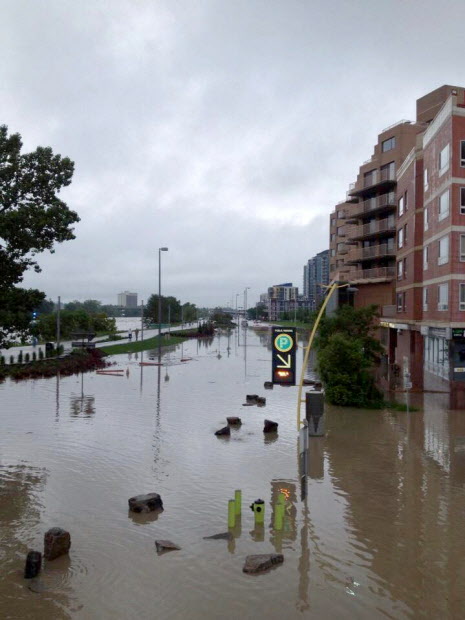 Last week, we were at the Flood Risk Summit in Toronto. It was a forum intended to share information among insurers, brokers, and government (local and provincial). It was amazing to see what is happening in Canada on flood insurance, and definitely worth a review here.

The biggest news of the day was that flood insurance has achieved 25% market penetration in two years. From 0%. In two years. The achievement of such broad take-up of flood insurance is hard to overstate, and this rate will have nearly full coverage within a decade of starting.

The reason for the success is that the insurers have almost unanimously prioritized the launch of flood insurance products. 15 carriers, including 13 of the largest 15, plus the excess & surplus markets have all launched flood insurance. In other words, there is a vibrant market.

Another reason for such a broad take-up rate is that many of those products are bundled into homeowners policies. It is well established that bundling is a strong way to increase take-up rates. In a survey of global flood insurance schemes, Canada has gone with “Private Bundled”. This is not to say that the government has not played a role in the success, but the insurers have certainly taken the lead.

There are some problems still to sort out. The main problem, I think, is the problem of insuring the highest risk properties. The Canadian market is aiming for “accurate risk-based pricing”, as per Lapo Calamai of the IBC, and that means the highest risks are the highest price. This is the well known vicious cycle where high pricing is a deterrent from buying coverage in the places coverage is most needed.

Another, less pressing issue is the lack of consistency among the different policies available, including policy wording and coverages. This is a problem for the brokers, and (to a lesser extent) property owners, as it is complex to evaluate different products all packaged and described differently. The word-lover in me did admire all the different terms for “flood”, such as excess water, overland water, water entry, different colours of water, and (somewhat radically) “flood”.

By and large, the situation is looking good. To support that conclusion, the last word can go to Kristen Gill from Aviva, who made a point of praising the goodwill and collaboration that has so far characterized the adoption of flood insurance in Canada. Hear hear.